In a season of me seeking life clarity, one of the places where I know for certain that I’m supposed to be at is in front of a microphone. Whether reciting poetry or preaching a sermon or encouraging a room full of youth or hosting an open mic, articulating powerful messages about life, love, and faith (just to name a few) is what I’ve been designed to do.

We each have a unique purpose and living out that gifting is what we all should be striving for every single day.

We should be striving to be the best version of ourselves along the path of life and its many transitions.  

Like a CEO developing her leadership skills. Like a painter mixing colors on his palette. Like a dancer practicing her pirouettes. Or a basketball player fine tuning his fadeways after a big loss.

We all should be striving for our best.

I found out about the tragic death of Kobe Bryant (along with his daughter and seven other people) seconds after walking off of the stage doing one of the things I love to do: preaching about the love of God.

I preached a sermon centered around Jesus giving up his life for his friends. I preached about the love of God and our call to action to show that same kind of sacrifice to those around us.  I preached about joy stemming from us pursuing our unique God-given purpose.

I preached my heart out.

Yes. Kobe was very polarizing. From the rape accusation in Colorado to his homophobic remarks to a ref during a game, and from his insensitivity toward the death of Trayvon Martin to the vicious trash talking he riddled his opponents with, Kobe had a way of dividing society. You either loved him or you hated him. If you wore green, then you hated him even more. And if you wore the Purple and Gold, then you paid tribute to him every way you knew how, including yelling, “Kobe!” while tossing rolled up paper into a trash can.

But if you were a fan of the pursuit of life’s purpose, you especially acknowledged the work Kobe was doing post his retirement. Kobe’s basketball tenacity drove him toward the next season of his life, still living out one of his primary purposes of inspiring others. He became more visible in his support for his family, mainly his daughter Gianna’s basketball aspirations. The Kobe Mentality that all of us came to know on the court carried into his post-NBA career and has inspired the next generation.

There’s nothing else that I can really say about Kobe Bryant that hasn’t already been said by my peers and by others in the public eye that would further enshrine such an influential individual.

All I can reiterate is: discovering and living out our purpose is what the rest of the world needs from us.

And, at times, in the midst of the transitions that life tends to bring us (no matter how unclear and broken we may feel), sometimes we just need to step up and knock down a couple of free throws despite the uncertainty.

“Don’t pass it!” Shoot the ball. Live your life.

One of the reasons why I’m thrilled about this year is that my beautiful wife bought me an old-school Royal typewriter and I intend to drop stacks of typed out poems at coffee shops around the city.

Call it, “Poetry Treasure Hunting”, if you will.

If you happen to come across these little cards of goodness, feel free to take one for yourself, post a pic on your socials, and tag me on it.

Have a great year and happy treasure hunting. 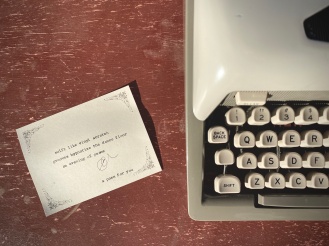 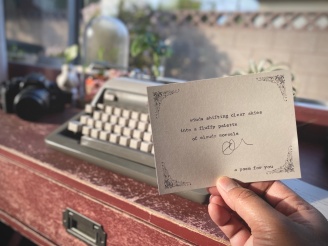